When Hare finished creating the Medicine Rite, his grandmother Earth made a special donation to the human beings so that they might have more of life. 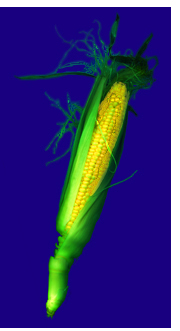 She told Hare to look at her, and when he did he saw that a plant was growing out of one of her breasts. This was the first maize plant.1 Still the people did not know how to cultivate this plant. When his clan had fallen on hard times, a Hocąk clan chief fasted on behalf of all his people. In time, the Maize Spirit, who rules over all aspects of corn, appeared to him and taught him all that he needed to know about cultivating and preserving corn.2 The tassels that appear on the ears of corn are also the manifestations of a female spirit, the sister of Green Man (Wąkcoga). Green Man is actually a Waterspirit, and at the same time, the spirit chief of black rocks. Heated black rocks are used to roast the corn, so the spirit of these rocks gains his name by being covered in green corn husks. His brother, Big Belly, is the pit in which the corn is roasted.3

When they planted the corn seed they used to pray to the local Waterspirit both so that he might keep the fields moist, and so that they might avert his ill humor, a malevolent will that could express itself in a devastating flood.4

Just as there are four seasons of the solar year, mani, "winter"; wana, "spring," tok, "summer," and cani, "fall"; so there are four seasons of corn. These are: Mąįna'ųwira (Earth Cultivating Month), Waxojrawira (Corn Tasseling Month), Watajoxhiwira (Corn Popping Month), and finally the time at which the Green Corn Dance is given to celebrate the harvest.5 In this dance everyone chooses a partner forming a double line. There is no restriction on who may participate. The dance is done to songs in a shuffle step, sometimes dancing forward and sometimes backwards. Usually it lasts 45 minutes or longer depending on the number of songs that are sung.6

Modern corn has kernels that are uniformly yellow, but maize as it was originally grown was polychrome, with kernels of yellow, white, red, orange, purple, and black. This is now styled "Indian corn," or "flint corn," called in recent times, warucúcge, "red corn," in Hocąk. [inset] 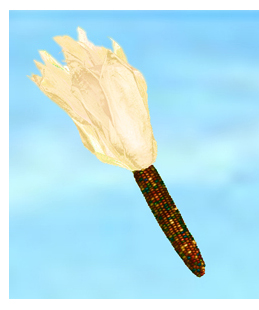 The Hocągara had many ways to serve corn, the most popular in the literature being roasted with bear ribs. Another way to serve corn is in maple syrup, a mix called wašuǧe watuc. It can also be made into hominy, called watašoroc.7 Perhaps the favorite use of corn is in corn soup. This is usually made by taking three quarts of carefully washed Indian corn and boiling in ten quarts of water for every quart of corn. The corn is boiled for eight hours with frequent stirrings. After the corn has boiled for four hours, four pounds of chopped venison or other meat is added.8

It is also worth noting here that not only did the Native Americans develop maize, but invented popcorn, called watájox in Hocąk. It is said, "According to Chief Whirling Thunder, a 20th century Winnebago chief in Chicago, Winnebago Indians have — for as long as anyone remembers — popped popcorn right on the cob by inserting a sharp stick through the cob and holding it near the fire."9 A month on the Hocąk calendar is named for the time when corn is dried and roasted: Watajoxhiwira ("Corn Popping Month").10 It is said that crickets announce the ripening of corn by weeping during Watajoxhiwira, since it was during this month that their spirit chief was killed. Cricket used to own all the green things of the earth, but lost them to the sons of Earthmaker who regained them for humanity.11 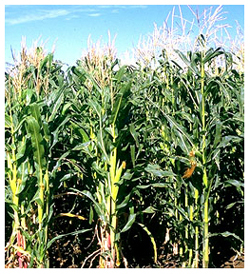 9 From the website, "What's Up with Popcorn?" (now defunct); but the same information is now contained at "History of Popcorn."