A Mink Tricks Trickster (§17 of the Trickster Cycle)

translation based on the interlinear of Oliver LaMère

(364) "I will get my fill of the kind of food that I like best," he said. Once had had finished tending to it, he had already put it on to boil. (365) Mink was coming to the bank. "Hohó, my younger brother, the one who lies low, here he is going about. Come here my younger brother, I am about to eat. (366) We shall eat together," he said. He came there. "My younger brother, I am thinking of something. Let's run a race. The one who wins the race, he will be the chief. The other will do the dishing out," he said. (367) He already knew that he would win. He said this because he thought that when he did the dishing out, he would get his fill there. 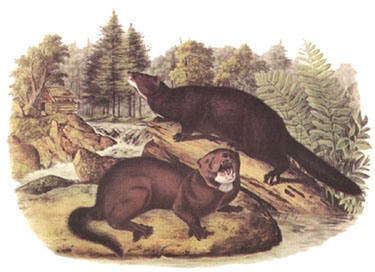 Now they went to a place where the river straightened out. (369) There they were to start from. "The goal is to be the pot. The one who touches the pot first, that one it will be," Trickster said. "Howo!" they said, and they started to run. (370) Trickster was left behind. Trickster, coming on to a crack in the ice there, stopped very suddenly. (371) He said, "My little brother, what did you say that you jumped over this crack in the ice and went on?" he said. Said Mink, "I said, 'You, crack in the ice, become big,' and jumped over it," he said. (372) Trickster said, "You, crack in the ice, become big," he said. He jumped but the crack in the ice became big and he fell into the water there instead. (373) Then the crack in the ice came back together again. There Trickster went under the ice. Thus it was. Little Mink had already gotten the food. There it had eaten a great deal. (374) It got its fill of eating fat. Then Trickster kept going under the ice until he came back along side of him. "My little brother, inasmuch as you have already eaten the food by yourself, put a little piece, a nice fat piece, into my mouth," he said. (375) He had come back to speak from under the crack in the ice. He did it for him. He put a piece into his mouth. Once more he asked again, and he put a piece in his mouth. Again he asked, again he put a piece into his mouth. (376) The fourth time he asked, he said that it had all been eaten up. He had also already drunk all the soup. So he dropped a piece of bear dung into his mouth. "Howá! what a bad fellow abuses me. (377) You will die," he said. Even there he broke through the ice and came out. He chased him, but finally it entered under the ice and got away. (378) Thus it was. How he tricked me, the homely coveter that he is. I will do something to you yet. You have nowhere to go," he was saying.

There a human village lay. (379) There he went. One day, where he had been a son-in-law, he thought that he would make something befall Mink. There they owned a dog. It used to be a real fighter. (380) He went to borrow that one. Then he used that and hunted Little Mink, but he would not come out from under the ice. Therefore, he was not able to find him. (381) Whatever happened, he was intent on doing something to him.1

Commentary. This story is continued in Mink Soils the Princess.

Comparative Material. The Lakota version substitutes a muskrat for the mink. The trickster Iktomi is sitting in the grass about to eat boiled fish when a muskrat approaches with the expectation that he will be invited to partake of the food. Iktomi rudely avoids making any such offer. Finally, Iktomi offers to race muskrat with the winner taking all the food, but muskrat points out that the race would be unfair, so Iktomi says he will run with a weight attached to himself. So he take a large rock and ties it to his body. He will run on one side of the river, and the muskrat will run on the other. The two set off, but Iktomi soon loses sight of the muskrat. Eventually, Iktomi realizes that the muskrat has been racing through the water. When Iktomi makes it back to the pot, he finds it empty, and in the tree above, the muskrat is finishing off the fish. Iktomi pleads that the muskrat give him a mere bone, so from his perch in the tree, the muskrat casts down a sharp bone into Iktomi's open mouth. Before Iktomi could finally get it out, he nearly choked to death.2

The Assiniboine have a trickster story that has some similarity to the present episode:

Inktonmi suffocates a bear in a sweat lodge. He wishes to distribute the meat among the animals, but is suddenly seized by a rock and held fast. Frog informs other animals. They devour all the meat. Finally Inktonmi is released by birds who break up the rock.3

Ice takes the place of rock in the Hocąk, and the amphibian role is played by Mink. In another Assiniboine story, it is the trickster Sitcóⁿski who causes two fish to be killed, but Mink steals them before he can eat them.4 The Assiniboine also tell a story in which Sitcóⁿski has some geese to eat, but Fox, who feigns a limp, challenges him to a race, winner take all. Fox wins and Sitcóⁿski loses his meal.5

A Blackfoot tale is similar to this last Assiniboine story. Old Man drove deer and elk over a cliff, then sat down to roast his meat. Coyote came along bandaged up as if he were lame. Coyote asked for some meat, but Old Man would only give him a share if Coyote is victorious in a long foot race. When the race began, Coyote feigned difficulties, but when they reached the turning point, Coyote unbandaged himself, and soon raced ahead. When he got back to where the meat was, he called on the whole animal kingdom to come and partake of the feast. Old Man kept yelling, "Leave some meat for me!," but they devoured everything. Nevertheless, the tongues that Old Man placed on poles were still there, but when he took them down, he found that even these had been eaten out by mice.6

In an Arapaho tale, the race is between Nih’āⁿçaⁿ and a herd of elks. He tricks them into running over a cliff. As he is roasting his meat, Coyote comes along. He keeps giving Coyote a paunch to use for getting water, but Coyote eats it instead. Every time he comes back and tells Nih’āⁿçaⁿ that a fish stole it. Finally, Nih’āⁿçaⁿ goes to sleep, whereupon Coyote and his canine confederates eat all his meat.7 The Arapaho story shows the degree to which "Trickster's Anus Guards the Ducks" blends into the present story.

In the Cree version, the stories of A Mink Tricks Trickster and Trickster's Anus Guards the Ducks are combined. The story goes as it does in the latter tale (q.v.). Wisakedjak (the Cree Trickster), buries his cooked ducks in the ground, feet up and then takes a nap. He woke up suddenly to an animal standing above him. It said, "Wisakedjak, let us race to see who shall have the meal — whoever wins will eat it all." Wisakedjak agreed, and they raced off in opposite directions; but the animal turned back and ate all the meat that Wisakedjak had buried. When he returned, Wisakedjak discovered to his dismay that he had been robbed. At that time, he had not yet named the animals, but this one he styled "the silver fox."8

The trick of the widening gap is found in a Creek tale. One day Rabbit met Lion as each was walking along singing the same boasting song. Rabbit played a couple of dirty tricks on Lion, but the cat never realized what was going on. Finally, when Lion was asleep, Rabbit shoveled hot ashes from the fireplace on him, and Lion jumped up and began chasing Rabbit. Rabbit jumped over a creek, and as he did so, he yelled, "River that gets big!" and the creek widen greatly. The Lion did the same, and jumped over himself. This went on until finally the lion could not negotiate the gap that Rabbit had created. And that is how Lions came to be on the other side of the Ocean.9

Links within the Trickster Cycle: §16. Trickster's Tail, §18. Trickster Loses Most of His Penis.

Themes: pursuits across the ice: The Warbundle Maker, The Fleetfooted Man; Trickster is taught a magical command to cause something to expand, but when he uses it, it works against him: The Elk's Skull; an inanimate object expands upon command: Kunu's Warpath, Baldheaded Warclub Origin Myth, Wojijé, The Raccoon Coat, The Elk's Skull, A Mink Tricks Trickster; someone falls through a hole in the ice into the water below: Black Otter's Warpath, The Ice Hole; Trickster is the victim of a trick: Trickster Soils the Princess, The Abduction and Rescue of Trickster, The Baldness of the Buzzard, Trickster's Anus Guards the Ducks, Trickster Eats the Laxative Bulb, The Elk's Skull, Trickster and the Honey, The Markings on the Moon, Trickster and the Eagle; a man's meal is stolen before he can eat it: Trickster's Anus Guards the Ducks, Trickster Loses His Meal, A Raccoon Tricks Four Blind Men.